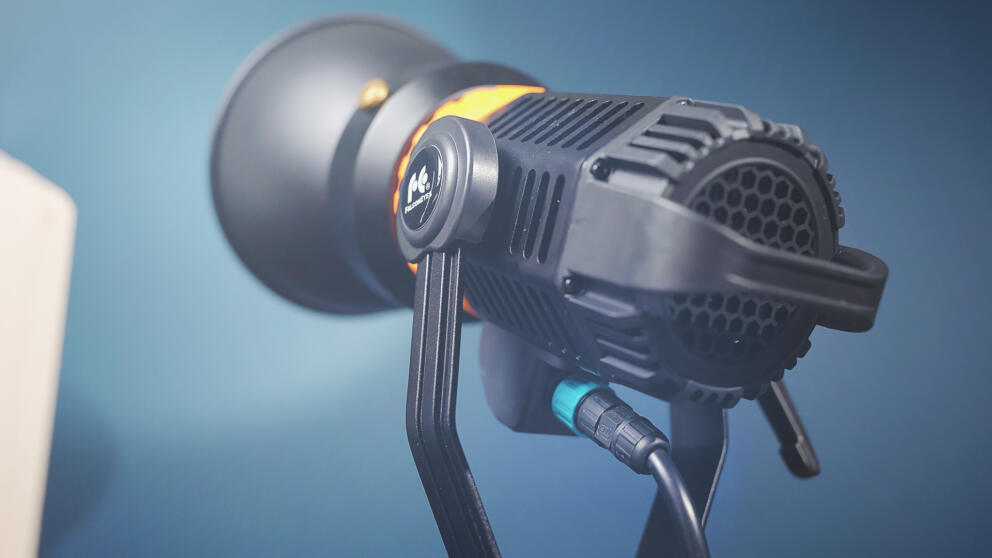 The Falcon Eyes P12 is a mini LED Fresnel light that can produce an impressive 19,900 LUX at 1 meter. The light is made from a rugged CNC aluminum, with a Bowens mount on the front. The unique part of this 150 watts LED light is the focusable beam angle from 16 to 55 degrees, narrowing the angle of the beam is how it's able to achieve such a high output. I have the 5600K version, but this is also available in 3200 kelvin as well.

This FalconEyes P12 was sent to me for review, but this video is not sponsored and these words are all my own based on my usage and FalconEyes is not seeing this video before posting.

Falcon Eyes says this light has a CRI of 97 and a TLCI of 98, I have no way of testing this out since I don’t own a high-end light meter, but I’ve been mixing this light with my Good SL60w, Daylight Quasar Tubes, and my Falcon Eyes roll flex light and haven’t had any issues with mixing colors yet.

This unit comes with a power control box, like many other lights of this strength and size. I find this power control box seems to be an older design than other lights I own, but it’s functionally pretty much the same as other lights. It offers a dimmer from 0 to 100%, channel selection and has a few different pre-made scene effects. Since this is a single color light, the scene effects are pretty limited for my use, but if you’re an independent filmmaker these may be more useful for you. The different scenes are Paparazzi, Lightning 1 and 2, Strobe, High/Low Beam, Double Flash, and Heart Rate.

One thing to be aware of with this light, it has a fan - and if you’re using this light close to your microphones while recording audio, you’ll probably be able to hear these fans. Using a low pass filter on your mic will help here, but if you’re using this light on full power it will get hot, and it will have a fan spinning the whole time. To my understanding, there is no way to turn the fan off. This light is so bright, you’re probably not going to want to use it close to your subject or microphones anyway, but this is something to keep in mind if you're interested in this light. 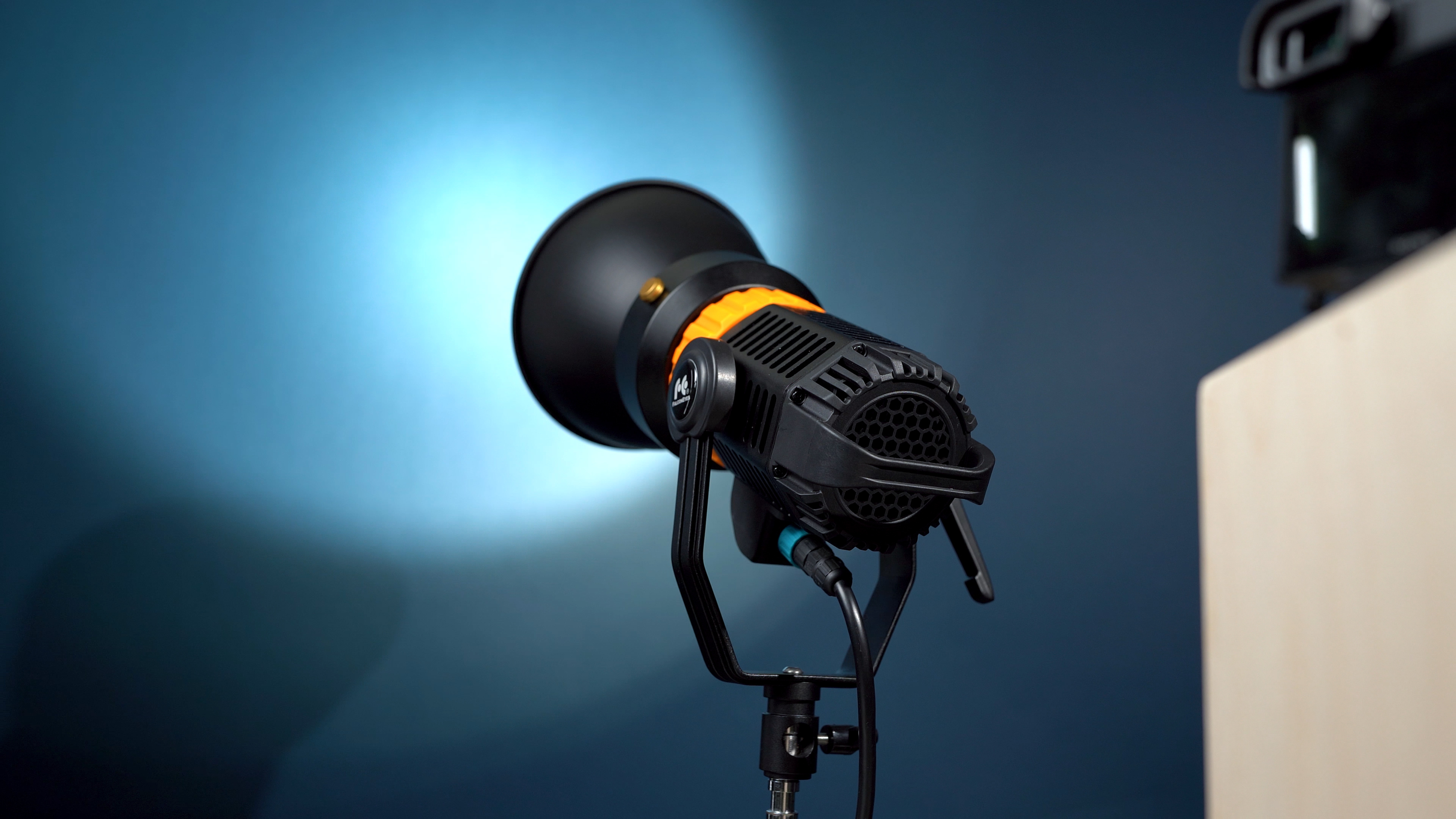 The Power control box also has the ability to be powered by a v-mount battery. If you’re using a v-mount battery, the power button allows you to press it up for battery or down for AC wall power. I guess this is useful if you’re using both powering methods at the same time - you can pick which source you want to use. In my use though, I don’t use the V-Mount batteries and sometimes I’ll find myself pressing the “Battery” option while turning the light on, and the light obviously won’t power on - so I have to go and flip the switch the opposite direction. This is getting really specific here, but I’ve done it just about every time I’ve used the light but I understand why it’s like that with multiple powering options.

To get around this, I used a safety cable to mount this box to the bottom of the light. If you’re moving lights around of mounting things in suspect places, having a few of these safety cables around is a good idea - but I’ve never used one to mount a control box to a light. It’s an ok solution, but be careful when you’re moving the light around because the box is dangling from the light stand. I'm not saying this is the most ideal setup, but it's the fastest for me to set up and break down, so this is what I've settled on for now. 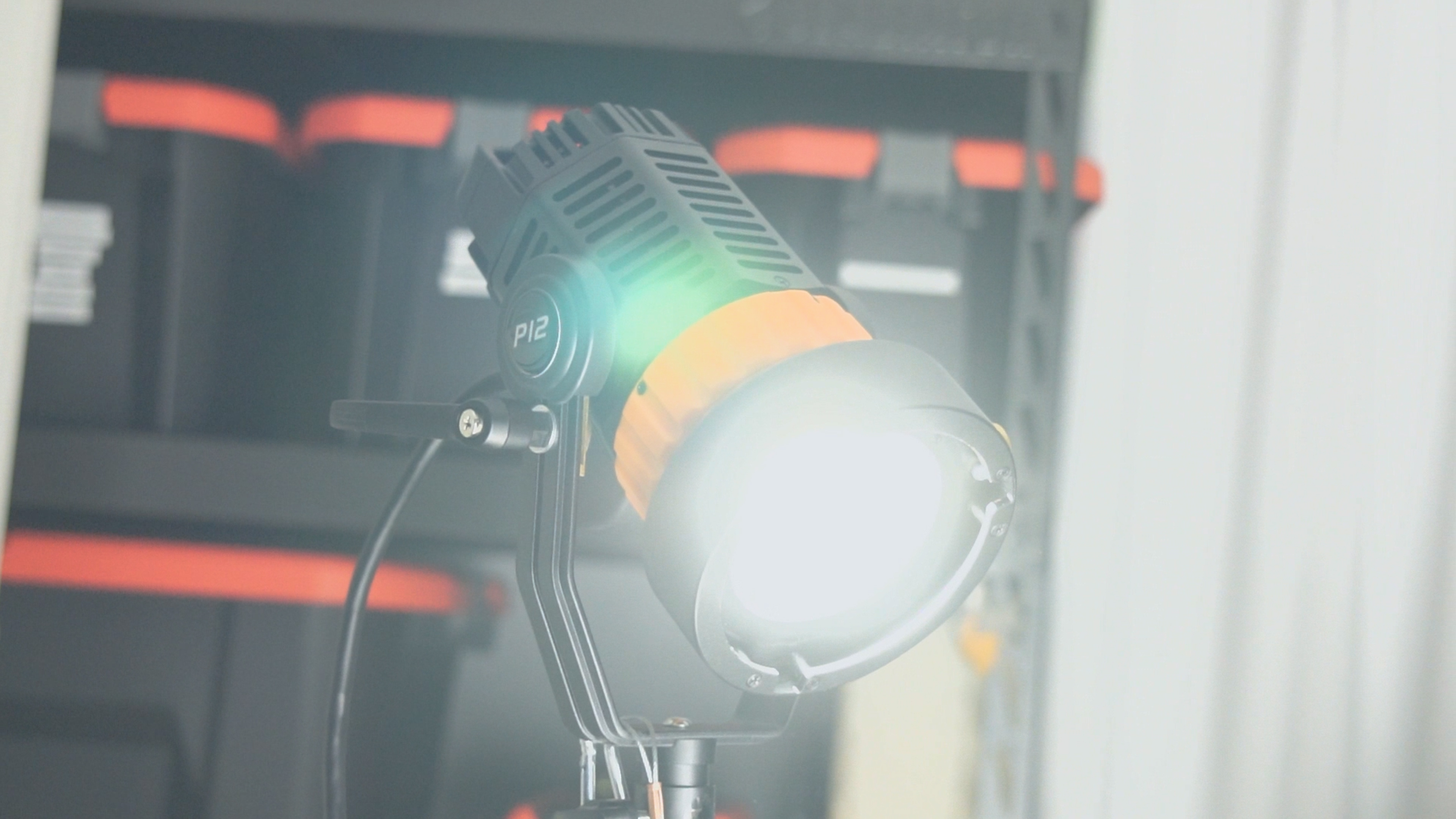 The control box also has DMX controls, I don’t have a DMX board to use this with - so I can’t report on any of these features. This box also has a spot for a 2.4giga hertz antenna to use with a remote for this light. The remote isn’t included with this light, and I wish falcon eyes would include remotes with their lights like other brands do, especially since the control box on this particular light is up on a light stand and you have to walk over to the light to adjust the settings. This is also a pain if you're using this light on a light stand that it high up in the air, you'll need to bring it down to adjust your settings.

The carrying case that comes with this light is a soft-sided case with storage for everything. I like that the case, but it will probably not hold up if you’re packing this light up to use on multiple locations over time, but it is nice to have a case to store the light and makes it easier to take around with you. It has dividers and unzips from the top to have enough space to fit the light without needing to fit everything in perfectly before it will zip up.

I've filmed a few products at higher frame rates, and I wasn't able to see any flickering when using the 180-degree shutter rule filming at 60 or 120 fps which is great, slowing down footage often requires a lot of light - and this light is great at offering a bright direct beam of light.

This light is kind of a new style of light for me to use because most of my lights are intended to be used with giant softboxes that produce large areas of soft light. I’m not saying that’s a bad thing, it’s great when it comes to filming people and reflective products for example. But I’ve been enjoying using this light when shooting macro shots of products, or when a scene needs a bright, focused amount of light in a certain area. Being able to adjust the beam angle and place this light closer to products has removed some of the need for me to use as many lights when filming products in particular. I like to shoot macro shots of products and use a high f stop to have all of the product in focus. A downside of shooting macro shots of products is that you'll need to use a very high f stop, and at f/22, you need a lot of light. I’ve gotten around this in the past by bringing out more lights and putting them as close as possible to the products. When using this light, I only needed to use one more light, to fill the shadows. This light is powerful enough to allow me to shoot a 1/50th of a shutter at f/22 with an ISO of 200, and only have to use another light to fill in some shadows, instead of bringing out all of my other lights to get that exposure. 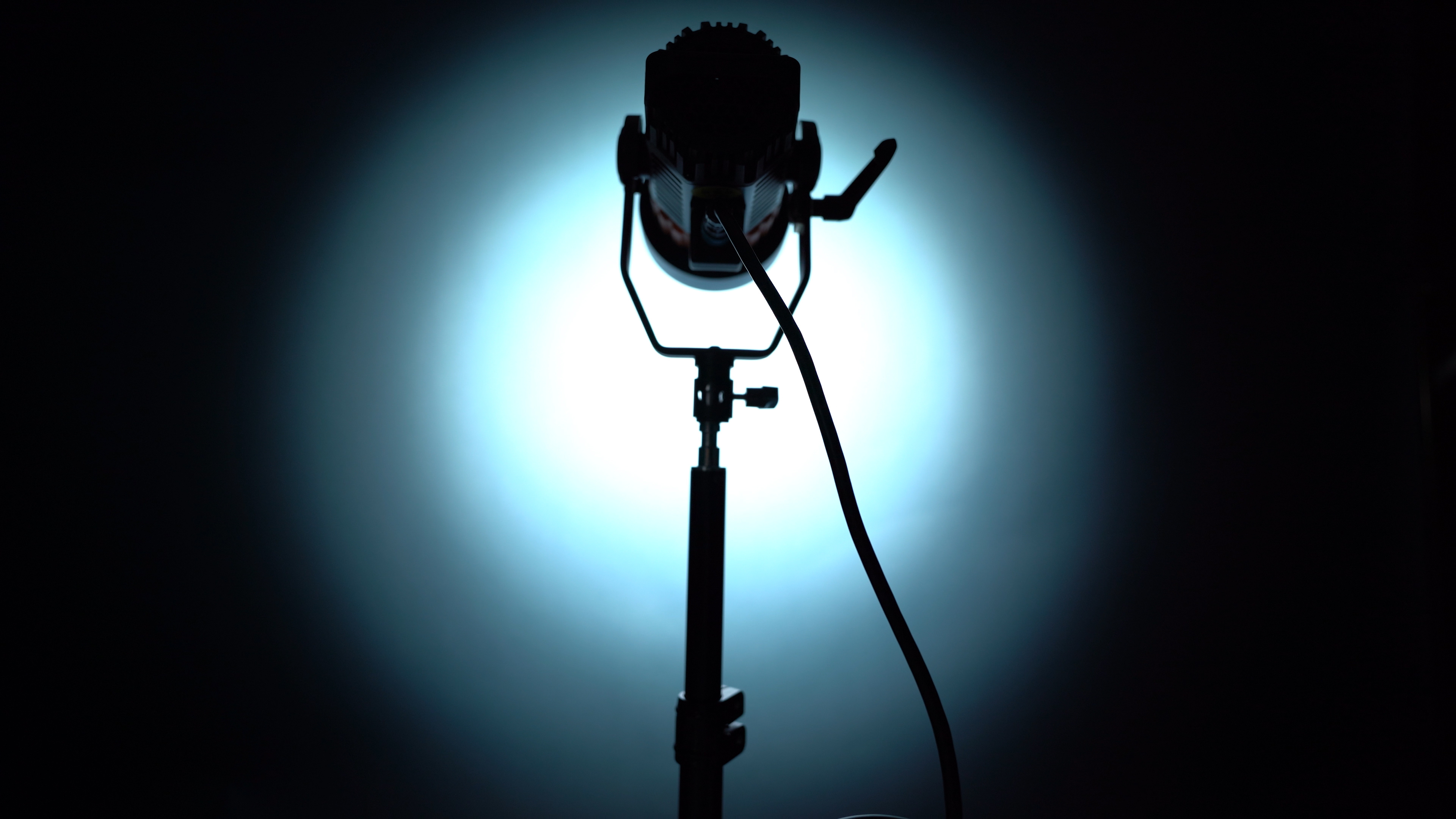 If you're looking for a mini fresnel light that can pack up small, this is a nice option and it's an affordable light considering what it does. It doesn't have a ton of features, but for a light like this, I'm more concerned about the light output. I've always been a fan of soft light for many reasons, but recently I've been using less-diffused light when filming products and have really enjoyed being able to get everything in focus. Since I'm filming products, the fan noise isn't a big deal at all. And it's been nice to have a Bowens-mount on the front so if I'm filming and need softer light, I can throw on any of my Bowens softboxes and have a softer light without changing the entire light out. I'm really not a fan of the dangling power control box though. Including a longer cord or at least a light stand mount for the power control box like their roll flex lights have would be a huge improvement over the included strap that they give you. My safety cable solution isn't ideal, but it's the best I could come up with before going into a more permanent route like building a clamp into the control box.