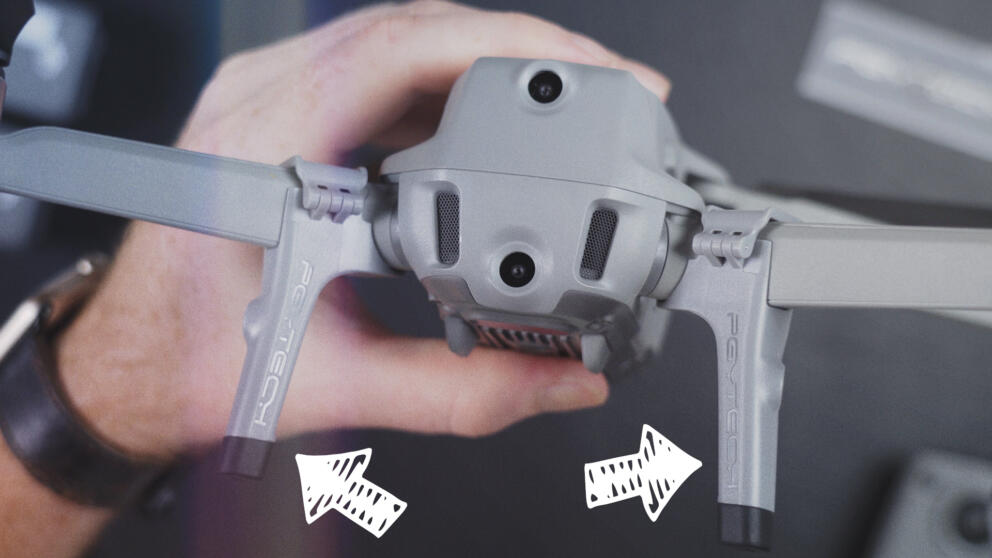 I recently made a video going over my most-used accessories for the Mavic Air 2, and some of you guys wanted me to give you some more accessories. These PGYTECH landing gear extensions were something that I bought for my drone right away but never used. I typically hand launch and catch my drones if I'm in an area that I can't launch from the ground.

That being said, I recently made a video about How to Hand Launch and Catch a drone, and I got some people saying that they aren’t comfortable with hand launching - which is totally acceptable. You do NOT have to hand launch your drone if you don’t feel comfortable.

If I have the option to, I will use a landing pad in tall grass or uneven surfaces. I keep it in my laptop sleeve in my backpack and if I have my laptop with me too, the landing pad stays at home. The landing gear could be an option for people without landing pads, but still want to launch in difficult areas and don't want to hand launch or land. The landing gear takes up much less space in your bag, and often you can put it in the same pocket as other accessories since they are so small.

The rear landing gear was pretty tough to get on the back legs the first, but after attaching and detaching them a few times, they were easier to get onto the drone.

I bought this landing gear, and I got the version without the lights. There is a version that you can attach flashlights to the rear landing gear to help you fly further in the dark. I can’t speak to the light quality, but overall the landing gear is made from sturdy hard plastic.

While flying the drone, they didn’t seem to affect flight at all. I didn't fly on a very windy day, but the drone was able to fly and hover without any problems. Not surprising since this only weighs 21grams.

The most concerning part of the landing gear are the clip that attaches the back landing gear onto the rear legs. The clip is difficult to attach to the rear of the drone, and I felt like I could possibly break it if I didn’t align it on properly. The first time was the most difficult.

The thing that initially turned me away from this landing gear, is that the legs of the drone cannot be folded up with these on. If you want to use these, you’ll have to unfold the drone legs to attach them and remove them before folding the drone up again.

The best part of these landing gear without the lights is the price. I picked these up for about $12 USD on Amazon. They match the drone color well, so they won't stand out too much and most of all, they do the job of raising up your drone off the ground to launch from tall grass. I hope in the future they make a version that will allow you to fold the drone up while leaving the landing gear attached.