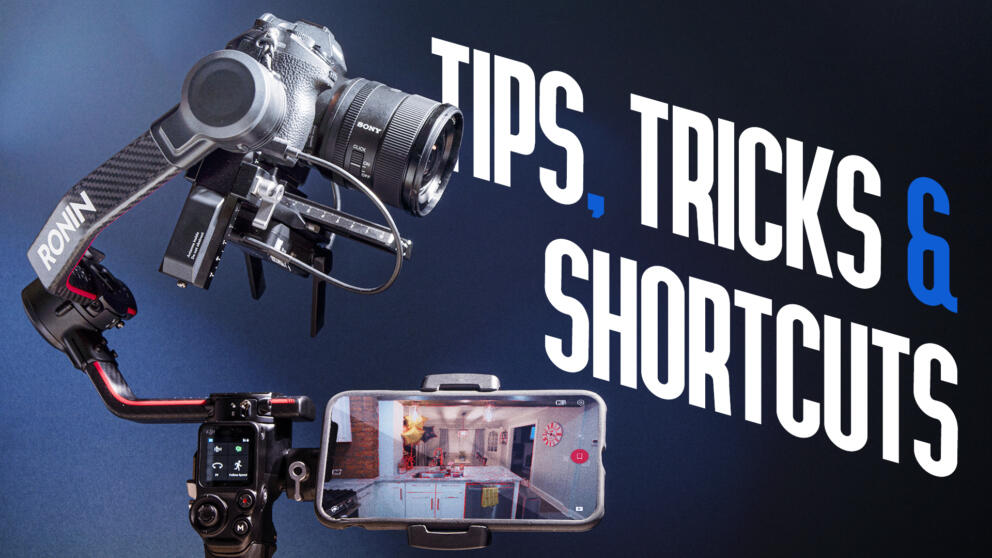 The RS2 gimbal is DJI's evolution of the workhorse Ronin-S. This new version is packed with improvements to the quality of the gimbal, ease of use, and new features. The RS2 has 20% more powerful motors while reducing the weight by almost 25%, and you can tell the difference right when you pick it up compared to the Ronin-S. Some of my favorite improvements are the full-color touchscreen that displays settings you can quickly change, or even select an ActiveTrack target if you have the RavenEye transmitter.

1. Calibrate Your DJI RS2 and Take Your Time with Your Shots

My first tip for the RS2 is to properly balance, calibrate, and use the correct gimbal modes. This is true for all gimbals, but just because the motors are stronger than the Ronin-S, doesn't mean it's going to be a magic bullet that will smooth out all shakes from your footage. You're still going to have to calibrate the gimbal after swapping cameras or lenses for the best results. You can check your gimbal balance check by swiping from the Right on the touch screen, going to More, the Gimbal Auto Check.

My next tip is to get familiar with the layout of the menu system, using the touch screen. You don’t really need to use the app it for small changes anymore. All of the settings you need to quickly change are right on the screen now. It's also nice that it displays when the gimbal is in sleep mode, sport mode, etc. The original Ronin-S had LED lights to show your mode, but that's it, and if you picked up someone else’s Ronin-S, you often had a hard time knowing which modes did what.

3. Use SuperSmooth When You Need To Eliminate Small Movements

If you have to use your gimbal in a situation where you’re still getting tiny shakes like filming like on a boat or a car, use the Super Smooth option for increased motor strength to hide those small jitters. DJI recommends using the lens strap and mount while using Super Smooth mode. They want you to have your lens properly secured to the camera and the gimbal because of the increased motor strength.

I've used Super Smooth briefly in my testing, but haven't used this gimbal in any harsh locations that have tiny shakes in the camera. For what it's worth, I was using super smooth in a normal shooting environment and didn't need a lens strap, but if you're hanging your RS2 off of a car or going on a boat - I'm sure you're already using a lens strap.

My next tip is to customize your dial functions to change your settings even faster. The RS2 has a dial wheel in the front of the gimbal, above the front trigger. This dial can be programmed to do different things, based on your settings. You can control the Focus Motor, Camera Focus, adjust the ISO, Aperture, or adjust the roll axis. You can adjust the Dial Speed in increments of 5 all the way to 100.

The joystick doesn't control the Roll motors, so assigning it to the dial is a great way to control this if you need to.

These settings will also depend on your camera's compatibility and which USB cable you're using. You can find the link to the compatibility list here.

My next tip is the know all of the gimbal modes and speeds. There is nothing more frustrating than wanting to use a gimbal to get the shot you want, and for some reason, it's just not working the way you want it to. The RS2 also has a few new modes you may not know about.

While Using the Gimbal, use can also press the front trigger to lock all motors and keep your camera in place.

6. Use the RavenEye to ActiveTrack Your Subjects & Monitor Your Video

My next tip can be an article on its own. If you’ve used DJI drones or cameras, you’ve probably used Active Track to follow your subjects around. By using the RavenEye, that same technology has come to the gimbal world. ActiveTrack is one of my favorite features, but it's not quite perfect yet. The Active Track seems to have the best results when theres enough light and contrast to pick out an object to track. If there isn't enough light, the gimbal might not pick up on the target, or not be able to reliably track the object.

I was tracking some objects in my house for some test footage and if my exposure was too low, the active track would expand my original selection and sometimes track the wrong subject or objects right next to it. Adding more light seemed to give me better results.

You can also use Active Track without using your phone by swiping down on the screen and using the front trigger to select your active track subject.

The beauty of the RavenEye system is that it uses your cameras feed to move the gimbal and track subjects. In the past, we had to use a smartphone to track subjects, but would only work as long as the cameras were perfectly aligned and had similar focal lengths. This was a lot of setup and hardware but with the RavenEye, we can track objects regardless of focal length.

If you're not using the RavenEye be sure to disconnect it from your gimbal, since the gimbal charges the RavenEye's battery, so your battery life will be much worse on your RS2 if you're charging the RavenEye. It takes 2.5 hours to charge the RavenEye, and you can use it for 3.5 hours before the battery runs out.

7. Adjust Your ActiveTrack Speeds Relative to your Focal Length

For example, for 12mm and under, you can be at 30 speed since the field of view is so wide time image can move faster without being distracting. But for 65mm DJI recommends you should be around a speed of 8. This makes sense since you don't want your camera whipping around with an 85mm lens on the front and possibly losing the target and producing jarring movements.

8. Enable the Virtual Joystick and Fine-Tune the Settings

If you're using the RavenEye, you're also able to see a live view of your camera on the Ronin app. Try enabling the virtual joystick and fine-tune your settings. Usually, I write off virtual joysticks and smartphone controls because they are a little difficult to use at first but after making some adjustments to the gimbal and giving it a chance, there are some great shots you can get with this gimbal.

A big benefit of using the virtual joystick rather than the joystick on the gimbal is that you’re not touching the gimbal and bumping it around to get a shot. This is especially important while shooting macro shots. The ability to place your gimbal down in one place and remotely move the camera is awesome if you’ve ever tried to film macro shots of a product with a tripod.

You can adjust the speed and smoothing to get panning shots without needing to touch your gimbal.

9. Use the quick release plates if you need to swap between gimbal and hand held shots.

With the RS2, you can use the included quick-release plates to quickly remove your camera from the gimbal, get some handheld shots or swap batteries, then attach the camera again very quickly - without the need to rebalance your camera.

When putting the Arca Swiss plate on, make sure to press all the way in to not throw off your balance if you need to take your camera off the gimbal and reattach it.

If you initially balance with the plate halfway or three-quarters in, disconnect then don't match the plate position perfectly when putting it back on the gimbal, the RS2 will be off-balance. I've learned this lesson from experience.

10. Lock the Screen When You’re Not Adjusting Settings

My Next tip for the RS2, is to lock your screen while you're filming. The touch screen on the RS2 is in a great location to avoid touching the screen by accident but I'm a big fan of using dual handles on my gimbals. I can't test this since the switch grip handles are sold out everywhere, but I noticed the mounts for the handles are right next to the screen, which makes accidental pressing of the screen a much bigger possibility. That's where locking the screen is going to come in handy.