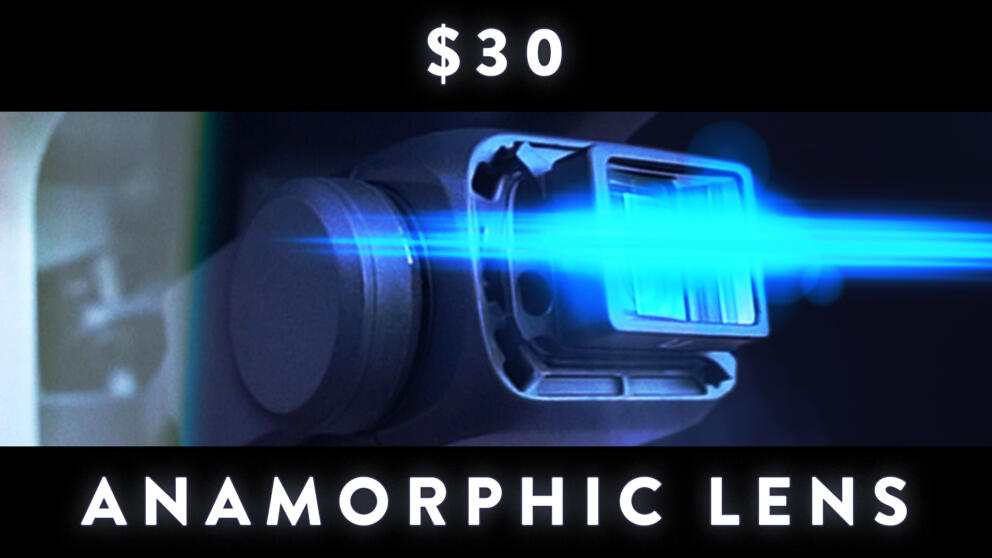 The Anamorphic Lens for Mavic Air 2

For around 30 dollars, you can shoot anamorphic, widescreen video with your Mavic Air 2 and even get some of those iconic lens flares as well. There are some pros and cons to this lens, so in this video were going to see if the Ulanzi Anamorphic lens for Mavic Air 2 is worth picking up?

The short answer is, for $30 dollars, it's worth picking up. Learning how to shoot anamorphic footage, edit with a different aspect ratio and add another technique to your arsenal of shots is worth the money. This lens does distort your image and has a funky color cast but stick around until the end and I'll let you know how to fix your colors for free.

My favorite part about this lens is the 1.33 aspect ratio this anamorphic lens gives you. The point of an anamorphic lens is to give you a wider aspect ratio but it's a little different when you're filming since the image looks distorted (more on this later). But once you adjust the aspect ratio in post - the image looks more natural and gives you more room on the sides of the frame. Once you get used to it, the widescreen footage was pretty fun to shoot with. It made shooting landscapes easier to get more in the frame without needing to fly higher.

While the widescreen is great, the next thing I was looking forward to were the flares this lens provides. This video is going to be filled with obnoxious flares because I wanted to figure out how to get the best flares I could. As long as you're pointing this lens directly at a light source, there will be some kind of flare happening. This lens being so cheap, the quality of the flares are hit and miss, but I enjoyed framing up my shots on my subject, then also trying to adjust the camera relative to my light source to get the most flares I possibly could. I'll have some tips on how to get the best flares with this lens later.

Another pro for this lens is that you can start and stop the drone and let the gimbal calibrate with the lens on. This was pretty cool since the moment lens for the Mavic 2 Pro comes to mind that you had to start the drone then put the lens on after the gimbal calibrated and put then counterweight on. There is no counter weight for this lens, and it's more of a filter size than a "lens" size. Another pro to the smaller form factor is you're able to fly in Sport mode without getting any gimbal errors or the gimbal requiring re calibration between flights.

The case that comes with the lens is nice, it's a little bulkier than other plastic cases from DJI or Freewell, but it's a nice durable zippered case with a spot for a lens wipe.

Another pro that comes to mind, again, is the price. This lens retails for about 30 USD and in the scope of drone accessories, it's pretty cheap for such a unique lens.

Some Downsides to the Mavic Air 2 Lens

And since this lens is so unique, and it's not something you're going to use on every flight. This lens also has some downsides to it as well, and the first major downside is the image quality.

Any time you're putting another lens or filter in front of your lens, theres a good chance there will be some kind of distortion, quality loss or color shifting. This lens has all of those problems, but understanding them can help mitigate it's effects and help you shoot a use able image. The most obvious distortion and quality loss is in the left and right sides of the frame, while the center has the least amount of distortion. Keeping your subject in the center of the frame is going to be the best idea to mitigate quality loss.

Another thing to be aware of is this lens seems to shift your colors around a little bit. I was shooting in D-Cinelike with this lens and it seems to have the green skew towards yellow, while yellow and magenta skew towards red. Blue and cyan seems to almost be a little more muddy and desaturated as they don't have as much "punch" to them as the normal, d-cinelike footage has.

To correct this, I took my color checker passpport along with me and got a quick shot of it as I was landing the drone and getting ready to pack up for the day. When I got home, I brought the shot into DaVinci Resolve and corrected the colors to better represent their true colors and exported these corrections as a LUT. You can download this LUT for FREE in my Mavic Air 2 course.

Another thing to be aware of, is that by using this filter, you wont be able to use an ND filter and will have to crank up your shutter speed if you're in a bright environment. In my opinion, the best way to use this lens is right at golden hour so you can use the sun as your light source to get the best flares with while not having very intense bright light. If you're using this lens in the middle of the day, cranking up your shutter speed is going to be the only way to accomplish the correct exposure but your footage might look choppy since you have to raise your shutter so much.

That being said, this isn't a lens you're going to use every day and it's a stylistic choice to use this lens. Adjusting the aspect ratio does add a step to your post production, but it's not difficult or time consuming at all to do right inside of Premiere Pro. I won't be using this lens on any commercial shoots, but for only $30 it's a good lens to experiment around with and make a few unique videos. Again, if you'd like to download my Ulanzi Anamorphic Mavic Air 2 color correction LUT for FREE, enroll in my Mavic Air 2 course.