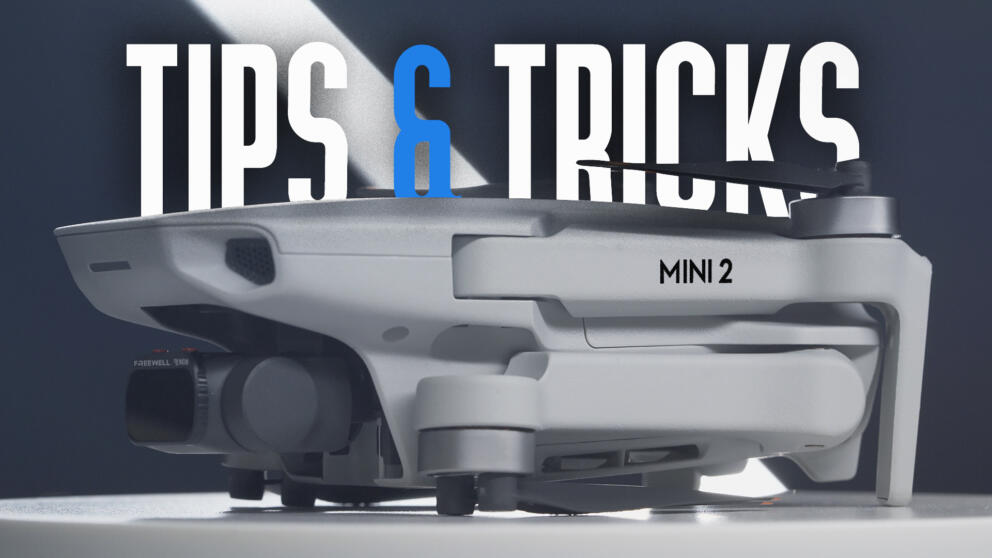 The Mini 2 is DJI's new and improved Mavic Mini. It still retains its lightweight, small form factor and shares a lot of the same accessories. This article is an extension of my Mavic Mini tips and tricks video, I'll leave a link to that video at the end of this article. Mostly everything in that video is applicable to the Mini 2, but I'll go over my specific Mini 2 Tips and Trick in this video. So getting straight into it, my first tip for the Mini 2 is to not try to fight the wind.

1. Don't try to fight the wind

One of the best parts of the mini 2 is its size and weight. One of the worst parts of the mini 2 is also, its size and weight. It's a portable drone you don't have to register - but it also suffers from being pushed around by the wind. With its upgraded motors, the Mini 2 feels like it can battle the wind slightly better than the Mavic Mini - but it's still not nearly as good as the Mavic Air 2.

While you're filming something, the wind may start to gently push your Mini 2 off course and your first reaction may be to try to course-correct and manually fight against the wind to balance out the movement of your drone. I've found this generally to be a bad idea. The Mini 2 has downward-facing sensors that help the drone move in a straight path, so whenever the drone is creeping in on direction, that usually means the wind is actively pushing it right now and when it dies down, as long as you're not flying too fast, the drone will slowly drift back to its original course. This happens when there is a gentle wind, if there is a strong wind it can completely knock the Mini 2 off course and it will not return to its original flight path, but for slow winds, trying to correct leads to overcorrection and ruined a few of my shots.

2. Use Quick Transfer to quickly access your photos without your controller

My second tip for the Mini 2, is to use Quick Transfer to quickly access your photos without your controller. One of my favorite new features of the Mini 2 is the Quick Transfer. I love the ability to easily get photos and video from my drone to my phone without needing to have my remote controller attached. For videos, you have the ability to download the full clip or download the trimmed clip.

To use Quick Transfer, turn on your drone and press the button on the back bottom side. Open your DJI Fly app and there will be a prompt to connect. After connecting, you can select your photos and videos from the drone and download them to your device. It really does live up to its name of Quick Transfer for quick setup, but it will take a long time to transfer large video clips. In my experience, it's best to transfer short clips or photos and if you need to work with larger clips, downloading them to a computer is often faster.

3. Zoom in on your shots

My third tip is to Zoom in on your shots. The DJI Mini 2 has the same zoom function as the Mavic Air 2, that you can press the "1x" button to zoom on the app, or press the "Function" button on the top left side of the remote and use the wheel on the remote controller to zoom in on your footage! This is a digital zoom, not an optical zoom. So be aware that you're digitally zooming in on your footage, but it's a nice feature to have if you need to check something while in the air - or don't want to edit your footage at all and do all of the zooming in camera. And speaking of the camera...

4. Shoot video in 4K 30, and photos in RAW but be careful where you point the lens

My next tip is to shoot video in 4K 30 and photos in RAW, but be careful where you point the lens with this drone. Another big advantage of mini 2 over the Mavic Mini is that you're now able to shoot in 4K 24, 25 or 30 frames per second. The 1080p didn't see any bumps in frame rate over the original, but the addition of 4K is a step in the right direction. The Mini 2 also has gotten raw photo support, so you can retain more detail in your images, which is a huge deal when it comes to editing.

As great as the 4K and raw photos are though, you should be aware of what angle you're pointing the lens relative to the sun or other light sources while shooting. The other more expensive drones manage their lens flares pretty well for the most part, but the Mini 2 suffers from some pretty heavy lens flares when pointing it towards the sun or where sunlight is directly hitting the lens. This isn't a professional drone, so I'm going to take it easy on the lens flares here - but it's something to be aware of. It can ruin a shot if you're not careful.

5. Make sure to have your memory card

My fifth next tip is to make sure you have your memory card. Some other DJI drones have a small amount of internal storage in case you need to use it in a pinch. However, the Mini 2 does not have any internal storage. So if you forget your SD card, or fill it up in the air, you're going to have to land, switch out your memory cards and then go fly again to get your shots. The internal storage on other drones has saved me a few times. I wish DJI would have added internal storage, especially since this is a drone aimed towards beginners.

So we’re halfway through the Mini 2 tips and tricks, and if you're enjoying this content be sure to subscribe and comment below if you learned something. I recently checked out my analytics and only 5% of you are subscribed. Those are rookie numbers in this racket, so if you're enjoying this video, like and subscribe. If you're a returning subscriber, thank you and welcome back.

6. Use Mavic Mini 1 Accessories, but Be Careful Which Batteries Your Using

My next tip, I'm not trying to sound like the drone police, but I have to say it. Even though the drone is 242 grams, which is under the weight limit for registration, you still have to abide by your countries rules and regulations. It only takes one person to not follow the rules to cause stricter enforcement and more guidelines put upon drones. I'd like to have them as unrestricted as possible, so know what you can and can't do in the area you’re flying in. And never ever fly in restricted airspace without authorization.

8. Get Plenty of Flight TIme

With that being said, my eighth tip for the Mini 2 is to get comfortable flying and performing maneuvers like orbiting, profile shots and tracking because the Mini 2 doesn't have any Active Track modes. It also lacks front, side and back obstacle avoidance. It does have some quick shot modes like orbit and helix that can be helpful, but the lack of obstacle avoidance on the front, back, and sides make these quick shots something you'll need to be very confident you're not going to hit anything. Lack of automated flight modes isn't necessarily a bad thing, because this forces you to learn to fly the drone and not rely on auto modes. I'm all about learning to fly manually before using the auto modes, so you'll know how to fly in case something were to happen where you need to manually fly the drone. One thing to note here though, since there are zero tracking features - you're not going to be able to film yourself reliably without looking at your remote the whole time. If you want great tracking so you can film yourself, you should check out the next drone above the Mini 2, the Mavic Air 2.

9. Be aware of the Wind Speed & Direction

My next tip kind of piggybacks off of the first time, and that’s to be aware of the wind, which direction it's blowing, and how fast it's going. 23.5 miles per hour is the absolute fastest wind resistance DJI says this drone has. That being said, I wouldn't fly in any gusts over 10, maybe 12 if I need to get the shot. And even in those conditions, I wouldn't fly very far away from myself.

10. Enable payload mode if you're flying with heavy accessories