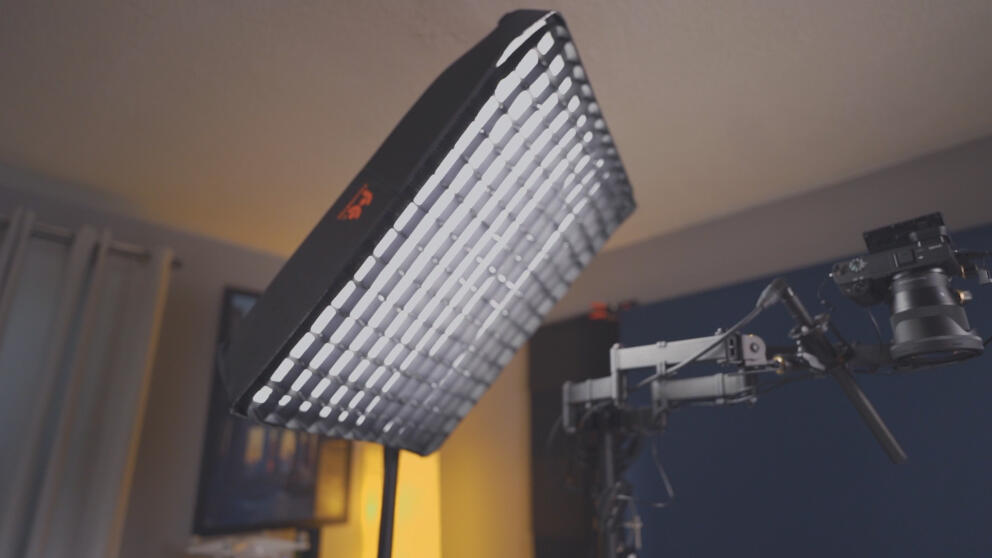 This flexible LED light is a bi-color 100w light that can adjust from 3000 to 5600 kelvin. The second version of this light and has 9 built in lighting effects, and can be powered with the included AC adapter or a V-mount battery. And it also comes with an included slim softbox and grid.

The light panel has 504 SMD LED's, at 100w total brightness. The panel is 18 inches x 24 inches and since the entire panel is a light, the light gives off somewhat diffused light with a thin layer of diffusion over the LEDs. It's still harder light, but since the light source is larger, it doesn't give you as hard of shadows as you see from a single big chip LED light. This was important for me, since I have my microphone and overhead camera blocking some of the light that is coming from this light to my right. I also tested out this light to see if I could get it to flicker at different frame rates and shutter speeds, but was happy to find there was no flicker.

This version of the light features 9 different scene effects, I didn't use any of them but if you're an independent film maker - these may be more helpful to you. The different scene modes are Lighting 1 and 2, TV screen, Candle, Paparazzi, Strobe, High/Low beam, Double flash and warm breathing. Another feature I didn't use was the DMX console, that allows you to hook a few lights up to a DMX board and control them at once. I have no need for that, but it has that functionality if you need it.

As far as temperature adjustment, half of the LEDs are warm, and half are cool - so adjusting the temperature of the light will dim some lights and intensify others. I've been using the light at 5500 or 5600 kelvin and have not noticed it was too dim, however it seems to become dimmer if you got all the way down to 3000 Kelvin. At 5600 k all of the warm LEDs are off, and at 3000 k all of the cool LEDs are off. I've been using this as my keylight at 35%, and with a shutter of 1/50th, usually at f1.8 or 2 with an ISO of 125 in a custom HLG3 profile on my A7III, if you're interested in those specs.

The flexible panel is advertised to be waterproof to 30 meters for 30 minutes, I have not tested this - and hopefully never will. But it's nice to know if I'm out filming somewhere and the LED panel gets wet, it wont be ruined.

The stand mount that comes with the light attaches via an X-bracket to the back of the light. Attaching the x-bracket to the light is very straight forward and still retains a slim profile of the light while being pretty sturdy. You can easily break this down and put it away quickly, making this a great light for traveling or how I'm using it, in a small space.

The bracket that attaches the light to your stand can pan left, right and up, but can't tilt down very much at all. Knowing this, I put it on a monitor arm that has a tilting mount so this fixed the problem for me - but it's something to keep in mind while using this on a light stand. To move the light down, you'll have to lower your light stand, which will change the angle of your light on your subject.

If you need to light a small place, or a place where you can't get a light stand into, this light is a great option. The beauty of the flex light is that you can roll it up, set it in a corner or tape it to anything and it will still be functional. The softbox isn't flexible, but with the softbox attached, the light is still only 5 inches.

The reason this light caught my attention, was because it was a thin light, that included a softbox and grid to diffuse and direct the light. It's difficult to find a flex light with a nice softbox and grid for a reasonable price, so I was very excited to test out this softbox. I was surprised at the quality, it's made from a heavy-duty fabric material that attaches to the light with velcro. The diffusion and grid attaches to the light the normal way by adding the diffusion to the inside of the softbox and the grid goes over top.

I was initially skeptical about how well the velcro would hold the softbox onto the LED light, but I've been using it for a few months now and moving it around my studio with no give in the velcro at all. It was difficult to attach the first time but it's stayed on and in place.

Another thing I noticed about the control box, there is no fan. Unlike the larger single chip LED lights, there is no need for a fan to actively cool the LED panel or box. I love this since my microphone is right next to the panel, there is no fan noise it can pick up. This fanless design makes my audio life a lot easier.

The bag that comes with the light is a soft, cylinder-shaped case. It’s nice to have a bag to put the light in, but I would have loved to have a hard case like the larger LED lights come in, but then again, this light including the soft box and grid was almost half the price of the BL-30TD II so I understand why there is a soft-sided case.

Falcon eyes advertises this light to have a 95 CRI - I don't have any equipment that will measure the CRI or intensity of lights, but I've been using it with a Falcon Eyes BL-30TD II or a Godox Sl-60w all set to the same color temperature and have had no problem in post production mixing these lights together using my color checker passport.

A con, and this is true with most Falcon Eyes lights - they don't include the remote in the box. The ability to mount the fanless control box near you removes this problem to a point, but it would have been nice to get a controller in the box.

A few of my own thoughts here, after a recent move, I found myself in the market for new lights that took up less space than my large single LED lights with giant softboxes. That's when I came across this Falcon Eyes light, and asked Falcon Eyes if I could have one to review. So they sent me this light for review, and I've been using it on all of my videos for the past 2 months and have loved it. All of these opinions are my own words, and I've enjoyed using this flexible light and love the softbox and grid.

I was able to take one of my large softboxes and LED lights out of my office and use this light that has a high output, slim profile and no fan noises to deal with. In the future, I'd love to explore more flexible LED lights options and maybe even light panels if I need more output in a small space. The giant single chip lights are great when you have the room to work with, but when space matters, fitting a few large softboxes into a small area will take up all of your space.